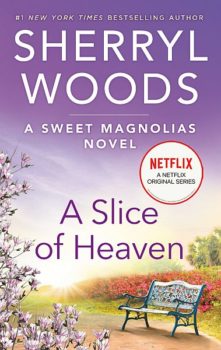 A Slice of Heaven

Emotions run high when the Sweet Magnolias try to reunite a couple who was meant to be together in this classic from #1 New York Times bestselling author Sherryl Woods.

When an eating disorder threatens the life of chef Dana Sue Sullivan’s teenage daughter, she has no choice but to bring Annie’s cheating dad back to Serenity, South Carolina. She tells herself and her friends it’s all about Annie, but the sad truth is she has a boatload of unresolved feelings of her own for Ronnie Sullivan.

From the moment Ronnie hits town, there’s no question about his intentions. He’s there for his daughter, to be sure, but he wants Dana Sue back, and every move he makes is designed to prove he’s a changed man. The one thing that’s never changed, though, are the sparks that fly whenever the two of them are in the same room.

Dana Sue can deny all she wants that Ronnie’s the only man for her, but not a single person in town is buying it. No matter the circumstances, Ronnie’s return is a sweet recipe for a new beginning.

Sherryl Woods is giving away a fun nautical bracelet to one lucky winner!