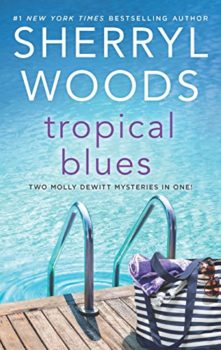 Finding a corpse in the card room of her elegant new Key Biscayne apartment complex was not what Molly DeWitt had in mind for a fresh new start—especially when the knife in the dead Ocean Manor’s president’s back appears to be her own. But when charming homicide detective Michael O’Hara decides to get on her case, it’s up to Molly to track down the real killer and clear her name.

When the body of her hotshot young film director is found in actress Veronica Weston’s trailer, she desperately needs an alibi—and Molly DeWitt is it. Molly’s PR job is to keep everyone happy, but solving the case is a challenge she can’t resist…just like homicide detective Michael O’Hara. She and Michael must strip the masks from a cast of potential killers, each of whom has a motive, to keep Veronica from behind bars.