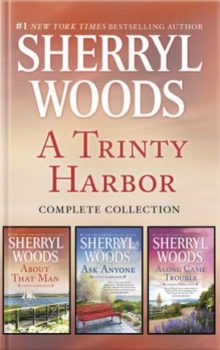 Sensible Sunday-school teacher Daisy Spencer expected taking in the orphaned ten-year-old caught hot-wiring her car to be easy; what she didn’t expect was an obstacle in the form of the boy’s uncle, Walker Ames, a tough DC cop who sees his unexpected nephew as his last chance at redemption. Soon he’s commuting to the charming fishbowl town of Trinity Harbor, where everyone assumes he’s seduced Daisy—their best Sunday-school teacher! But to Walker, Daisy is a disconcerting mix of charming innocence and smart-mouthed excitement in a town that’s not as sleepy as it looks.

When Bobby Spencer receives a literal rude awakening one quiet Sunday morning, he’s far from pleased with the woman responsible. Desperate, Jenna Pennington Kennedy is seeking to capture Bobby’s attention so he’ll hire her to plan the town’s new riverfront development in order so she can prove to her father she’s a responsible woman, not the reckless kid of old. But the last thing Bobby wants in his life is a sexy single mom with grand ambitions, and Jenna doesn’t need any more rollercoaster romances; however, Trinity Harbor, love has a way of defying expectations—ask anyone.

Sheriff Tucker Spencer has seen some action but finding his almost-naked ex asleep in his bed leaves him…speechless. Mary Elizabeth, who broke Tucker’s heart six years ago by marrying a charismatic Virginia politician, needs Tucker’s help proving her innocence in her husband’s murder. Mary Elizabeth needs Tucker, period. But along with her return comes all the town gossip about their reunion romance. In the end, he’ll confront a mystery even more confusing than murder: how the heart makes room for forgiveness and a new start.

Other Books in Trinity Harbor Series