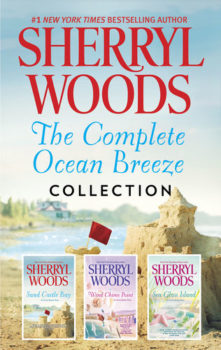 In a trade-off she’s lived to regret, Emily Castle left home years ago to become an interior designer.

For Boone Dorsett, losing Emily left his heart shattered, but another woman was waiting in the wings. Now a widower with a young son, Boone has a second chance with Emily when a storm brings her home. But with his former in-laws threatening a custody suit, the stakes of loving her are higher than ever.

Facing a personal crisis, ambitious and driven Gabriella Castle retreats to the welcoming arms of her family. Everything she’s worked for has been yanked out from under her, and she seeks the serenity of her grandmother’s home on the North Carolina coast.

Wade Johnson fell for Gabi the first time he saw her. To get her to stay, Wade will need a whole lot of patience and gentle persuasion…and maybe the soothing sound of wind chimes on a summer breeze.

With her two younger sisters heading for the altar, will Samantha Castle exchange old dreams for new ones? Lately she’d rather be on the North Carolina coast with family than in New York with agents and actors. Though she vows not to let her teenage crush on Ethan Cole influence her decision, it’s hard to ignore her feelings for the local war hero.